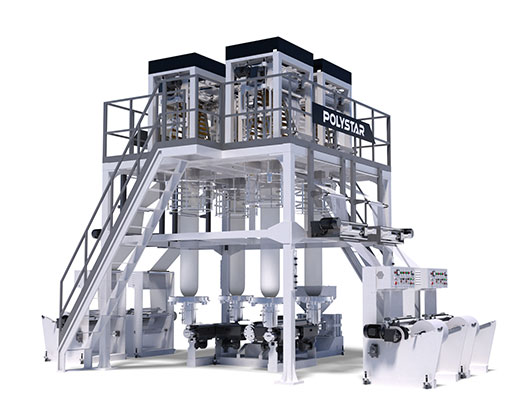 Four die head blown film machine – Who is it for? 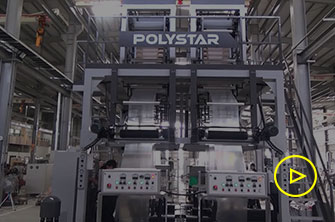 The four die head blown film extruder is designed for bag and film producers who need to maximize the output for small-sized bags ranging from 100mm-300mm in width.

This model uses a bigger extruder of Ø 65mm (or Ø 75mm) to achieve higher extrusion output up to 140kg per hour. The extruded material is then evenly distributed into four die heads and produces four film rolls at the same time.

The four head model is an extended version of the popular Twin head extruder with similar working principles, in which the bigger-sized extruder is able to run at high speed even when producing small-sized film rolls, thanks to its ability to distribute the material into more than one die head simultaneously.

The manufacturing precision of the die heads and accurate temperature control throughout the entire extrusion process ensure even material flow. The four take-up units and winders are controlled separately which makes it possible for operators to produce four film rolls of four different width and thickness, allowing more flexibility to produce 4 rolls of the same or different sizes depending on the production requirement at the moment.

There are several ways of producing small-sized film as shown in the comparison chart above,
Option (A) Uses a small extruder with single die head, this is the easiest and most economical way. The output is relatively lower compared to other options. This option is recommended for producers who produce film or bag of many different colors, sizes and formulas. Using multiple sets of small extruders can be beneficial and avoid the loss from constant change of sizes, colors and materials.

Option (B) Produces one film roll of wider width (for example up to 1200mm or 1400mm) and then hot slit and seal the big film rolls into 3 or 4 smaller rolls on the extruder or on the bag making machine.

This method has been adopted by bag producers who are more experienced in operation and is an effective way to achieve high production with less number of machines. However, bags produced using hot slit and seal is not accepted in some markets.

Option (C) Use a twin head extruder, this is the most recommended model for general bag production, as this machine is relatively easier to operate, less expensive, and able to achieve very good output especially for film width that ranges between 300mm – 600mm.

See the 3D video of the twin head machine: https://youtu.be/Q2ARCCKuDjo

Option (D) Use a four head extruder and produces 4 film rolls film rolls at the same time. This model shows the best efficiency when producing film rolls from 100mm – 300mm. It can achieve higher output than the model with 2 die head particularly at this small size.