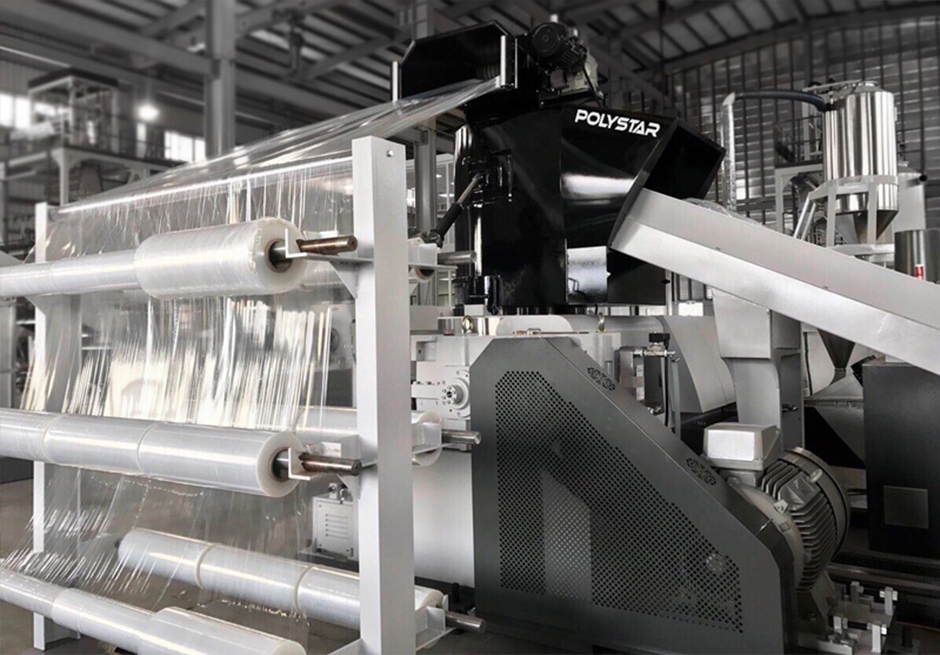 POLYSTAR will demonstrate its latest developments on pelletizing technology during the upcoming exhibition Taipei Pack 2020, providing simple yet efficient recycling solutions for a wide range of industrial waste from the plastic packaging sector.

Each solution is specifically designed to target only one or two categories of waste with minimal power, labor and space requirement. The screw designs are optimized to ensure minimal material degradation and therefore higher reusability back into the production lines.

Below are the 4 types of solutions to recycle different types of packaging waste: 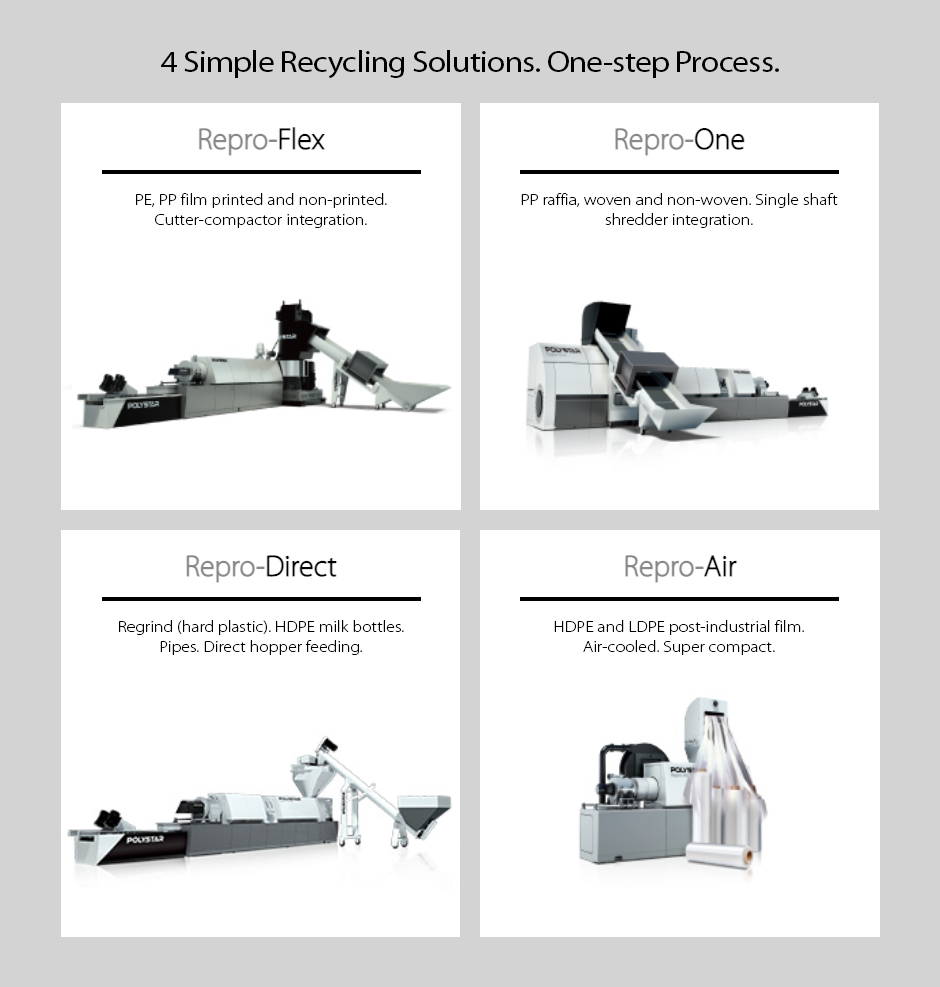 Features: High performance recycling machine for a wide range of film waste. This includes materials that are difficult to process such as multi-layered film laminated with PET.

As the layer structures are the use of materials are more complicated than before in order to produce film for different packaging applications, we have developed high performance degassing and specialized screw design in order to process these types of waste that usually contain , which are not possible to process in a standard recycling machine.

Designed for one-step recycling of PP raffia and woven bags, packaging films that are higher in strength and easier to stick, such as cling film, CPP and BOPP film-on-roll. Foam, soft-irrigation pipe can also be processed by this machine.

Features: Single shaft shredder integrated. Powerful yet gentle. One step process for materials that are larger in size and higher in strength.

More injection and blow molding producers have begun to pelletize their post-industrial waste instead of only doing size reduction. By using pellets instead of regrind back to the injection processes increases production stability and quality of the final product. In addition, if the recycling is done in-house instead of out-sourcing, the quality of the pellets are also much better controlled.

Features: Recycle without water. The recycled pellets are almost as good as raw material thanks to minimal material degradation.

The Repro-Air is designed for LDPE/LLDPE film producers who needs to recycle their defected film-on-roll in-house. The compact, space saving machine is ideal for producers who require only 40-50 kg per hour, which can be fitted right next to the blown film or cast film extrusion lines. The short screw design with low processing temperatures are ideal for un-printed film-on-roll and the machine runs automatically without labor intervention, it can process multiple film-on-rolls at the same time.

Visit Polystar’s booth booth during Taipei Pack to discuss about your recycling requirements, or if you are unable to attend, send us an email at sales@polystarco.com so our representatives can further assist you.

As the largest LLDPE stretch and PE cling film producer in Taiwan with monthly production over 3,000 tons (achieved with several 5-layer cast film machines from Germany), in-house recycling is valued highly by the 30-year-old film producer as part of the production process to ensure quality and consistency in the end product remain high.

Ever since the company’s major expansion in 1991, it has been carefully selecting only the best and world-class machine manufacturers in the market as its partners. The company was the first Taiwanese film producer to bring in a five layer casting extruder from Germany and is now equipped with several multi-layer cast film and printing machines from Europe.

The film producer has opted for the POLYSTAR recycling line Repro-Flex to process its in-house waste generated from the extrusion lines. The POLYSTAR line was in fact the first equipment that the producer has ever purchased from an Asian manufacturer. Sharing his experience on the decision making process, the CEO was particularly impressed after seeing the trial runs at POLYSTAR’s facility,mainly for the following reasons:

The increase in labor and logistics cost in Taiwan has become more difficult for Taiwanese plastic producers to stay competitive. Therefore making sure that minimal labor intervention on the machine is crucial.

2. Consistency and quality in the recycled pellets -

The consistency in quality(uniform in size, reusability, minimal property change and degradation) of the recycled pellets can ensure that the recycled material can be reused again in the extrusion machines to produce high-end film product with the highest possible quality. 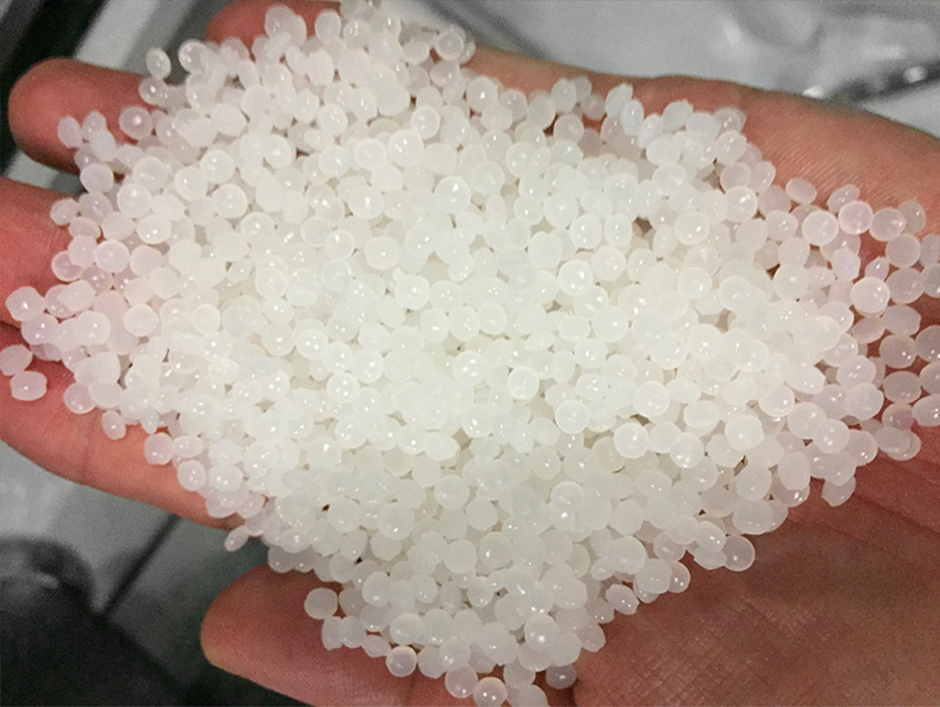 The POLYSTAR recycling machine is now running 24 hours a day and 7 days a week in the factory of the ISO 9002 certified film producer,with an average production of 250~300kg/hr with little operator intervention, setting another great example of effective and valuable in-house recycling. 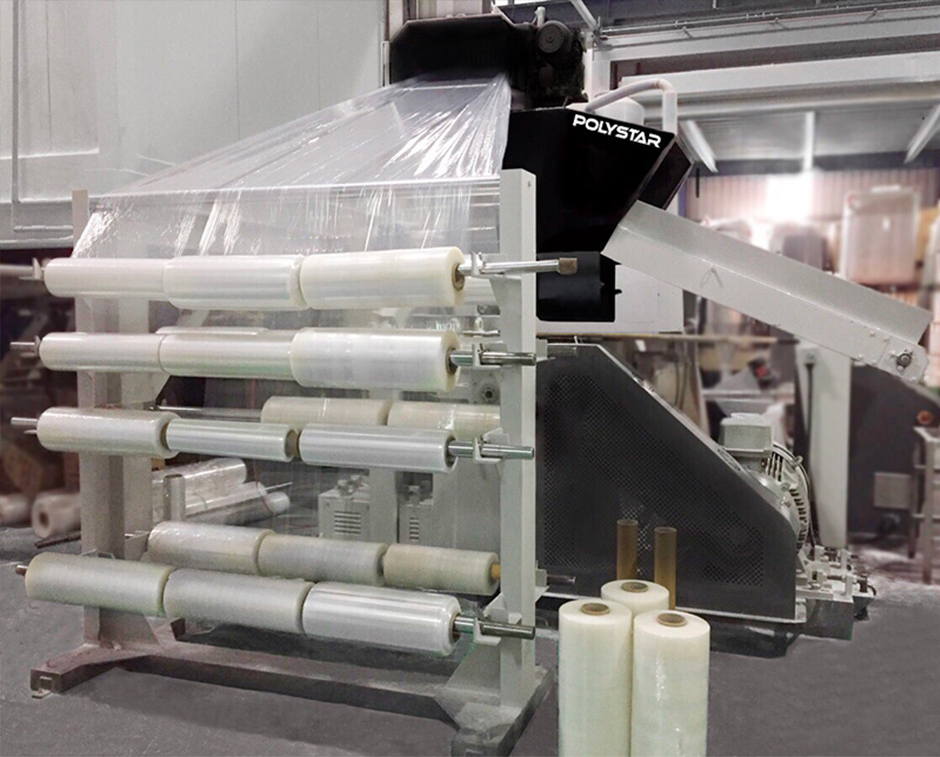 Despite the difference and variation in film width, thickness, layer structure (mono, three and five layers), the machine can handle all these film scraps of different compositions with consistency and still produce high quality and uniform-sized pellets, which are then put immediately back into the cast and stretch film lines.

“The built quality of the machine as well as the product (recycled pellets) quality meet our high standards, commented the production manager of the film manufacturer during a visit from POLYSTAR to check up on the user experience after several months of operating the machine. “The level of automation is up there and the operation is so simple.”

The design is also very compact and takes up very little space. “This was important for us because we had space limitation and we needed a machine that could fit right next to our stretch film line,” Mr. Hsu added.