In January 2015, another Polystar plastic recycling machine was commissioned in the leading film and bag producer in Dubai to recover production waste generated from in house.

The company was established in 1982 and focuses mainly on the manufacturing of polyethylene sheets and bags. Its product range includes HDPE/LDPE plain and printed bags for supermarkets, agricultural products and boutiques, shrink wrap covers (for wrapping pellets during transportation and storage of cement bags and beverages), heavy duty garbage bags and many others.

The company had previously acquired a plastic recycling machine with the integration of a single shaft shredder but has been facing some problems especially with film recycling. The light-weight film flakes creates the problem of "bridging" at the shredding section which makes it difficult to feed the shredded film flakes consistently into the extruder from the shredder. The material is often over-fed or fed insufficiently due to the low bulk density of the film waste.

Polystar’s film recycling machine with an integration of a cutter compactor helps to solve this problem by giving the material a quick densifying process before feeding it directly into the tangentially connected extruder. This process helps to achieve very stable and fast output. The machine can process scrap material on a conveyor and film-on-roll on nip roll film feeder simultaneously. Plastic film waste and scrap recycling can be a problematic operation, since the low bulk density of the material can make high output difficult to achieve. As it is hard to achieve high throughput with the light-weighted film flakes without going through densification and compacting process first. 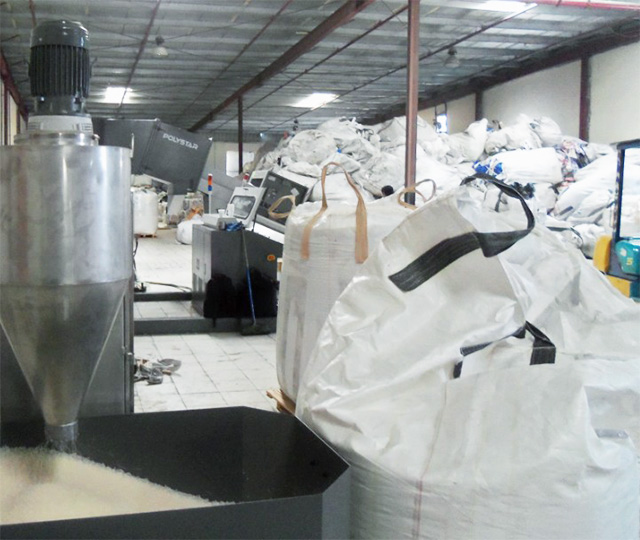